Dennis Boggs collection, Oregon, includes this micro-sculpted pebble figure of a face with a featured inclusion as a sparkling eye 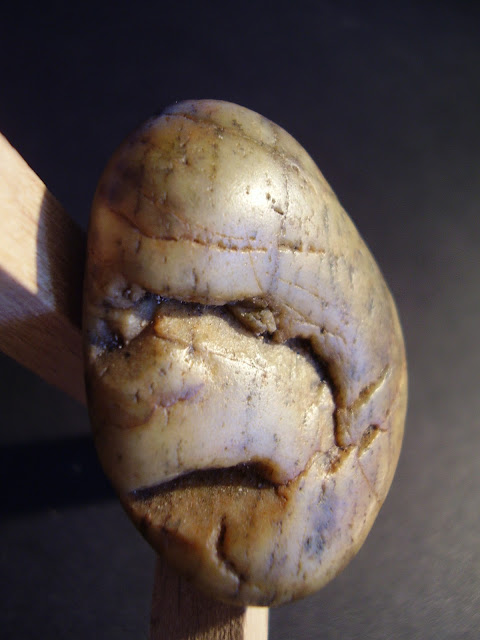 Microart sculpted face on a pebble.
The Dennis Boggs collection, Columbia River at Irrigon, Oregon
Pebble measures 3.5cm by 5cm in this view. The worked aspect, top of eye to bottom of mouth, is within 19mm/5cm

The left eye of the figure has some very small exposed crystals on the surface of the stone which reflect the direct sun like little sparkling stars. Unfortunately, my attempts to capture them with the camera were not successful. The stone comprising the left eye area does not have any sparkling attributes. This figure stone may well be an example of the "one eye open, one eye closed or missing" motif seen in world portable rock art as described at originsnet.org, and discovered by untold numbers of people from coast-to-coast in North America and in Europe. This is a meme originating in Lower Palaeolithic times, ca. 500,000-200,000 years before present, according to originsnet.org. Its presence calls for study of the Columbia River valley in Oregon and Washington for more archaeological evidence of humans carrying this meme into America at an, as of now, unknown time.

On close personal inspection at 10x lighted magnification through a Bausch and Lomb scope, I can recognize the eyes and under brow area as being humanly worked. One might think the mouth is a natural part of the stone which was exploited by the artist but I have seen enough of these "gashes" made on suspected art objects in the correct place (see the eyes on the figure "The Trickster" also found by Boggs) that I believe this is an intentional removal of stone material using a technique which was known to the early artists.

Find by Dennis Boggs at Irrigon, Oregon, along the Columbia River and in the context of other portable rock art which has been featured on this blog. (Search BOGGS).

Compare this figure to one found about 40 miles upriver at Kennewick, Washington, in Columbia Park, not far from where the famous Kennewick Man skeleton was found. 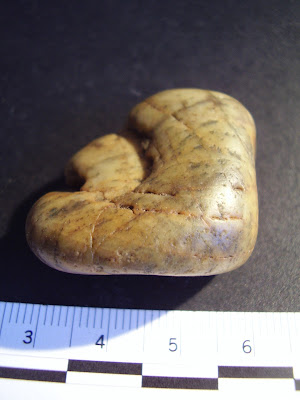 View of the artifact to highlight two worn surfaces on the back which intersect at largely a right angle. The angle allows one to easily hold the head in the upright position in the finger tips as if to "experience the face and crystals" for oneself from the optimal viewing angle. 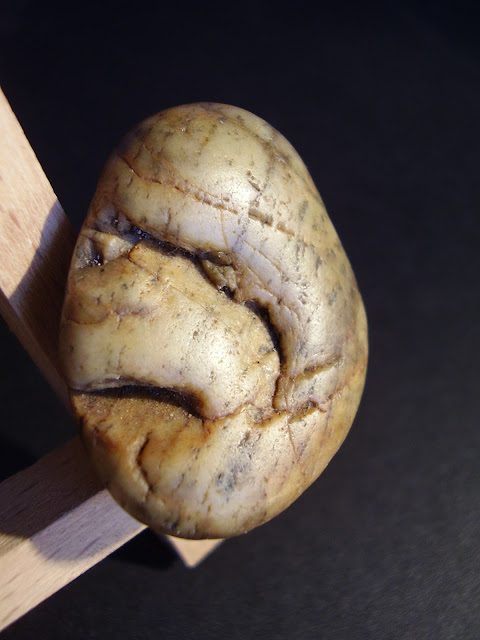 Only when viewing the artifact at an angle to see the face in its optimal position does the piece take on an overall egg-shaped appearance. At no other viewing angle does the pebble have any kind of an egg shape.

Thank you Dennis Boggs for sharing your 50 years of experience "looking at the rocks" along the Columbia!