Ohio bird figurine similar to a Russian (Siberian) bird identified by archaeologist M.A. Kiriyak at the Bol'shoi El'gakhchan I site 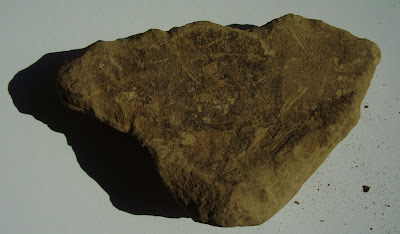 (click photos to expand)
Ohio bird figurine found by Ken Johnston in an art and tool context in Licking County has similarity to a... 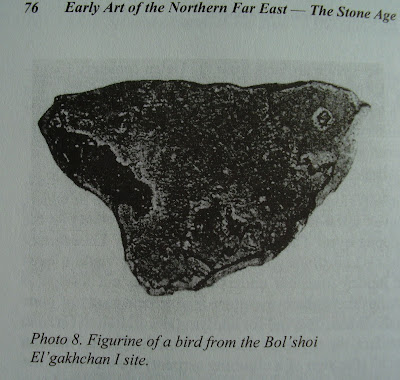 I have read archaeologists and art scholars practically lament the "absence of Paleolithic art in the Americas." The Eurocentric and preconceived approach to "art" has the expectation set at "cave paintings like Chauvet" or "Venus" female figurines like the popularized types of the European Gravettian era. Most all of the art of the Paleolithic is farther removed from our own culture and expectations than the well known art of Europe so it is more difficult to perceive in the archaeological record and takes "a new eye" of perception "outside the box" of our normal cultural and visual world. The modalities of North American Paleolithic portable rock art forms can be well informed by work done in Russia by M. A. Kiriyak. Her book "Early Art of the Northern Far East: The Stone Age" has been translated to English by Richard L. Bland of the U.S. National Park Service Shared Beringian Heritage Program in partnership with Russia. A link on the right side panel goes to a preview/purchase web site or you may contact US Government Printing Office bookstore for a copy of the book. 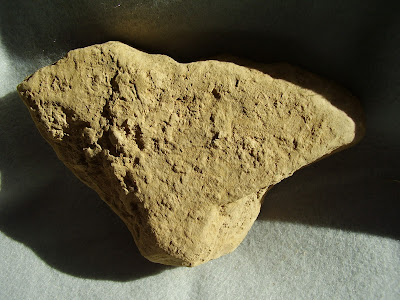 Beak at left in this view.  I chose not to clean this piece any further in order to maintain some of the context soil and to preserve the "eye" for more controlled study.  The eyes of artifacts such as these may be indicated by creating a depression in the stone and adding pigment or changing the patina.  The presence of an "eye" is often a sign that someone in prehistory made or noticed the bird form and "animated them" with the addition of the eye(s). 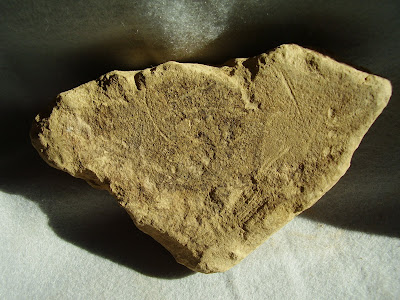 Beak at right in this view
link to "Sir Nameless"
Earlier posting of human facial profile sculpture found within a few meters of the bird featured here.  The artificiality of the bird here, despite its seemingly crude and somewhat ambiguous form, is supported by finding a carved human face silhouette sculpture in its immediate proximity.  This is, in fact, what bird figurines of the Stone Age can sometimes look like. 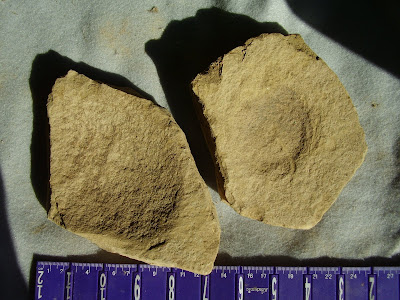 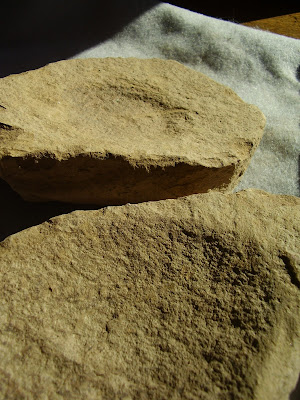 Pitted grinding/pounding stones, similar to an anvil or mortar stone, found in immediate vicinity of the bird figurine

drawing from M. A. Kiriyak page 56 of the Siberian bird figurine 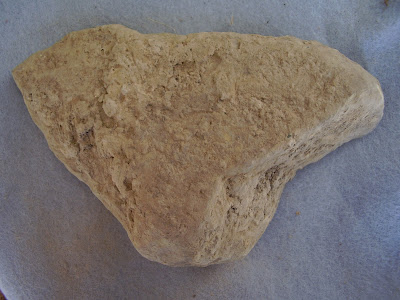 Beak at far left in this view 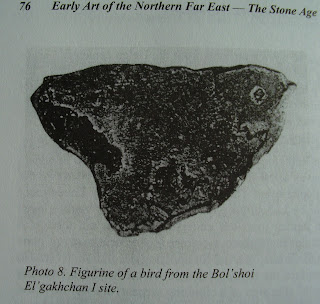 Here's the Siberian bird figurine once again for comparison to the Ohio example, seen above and below 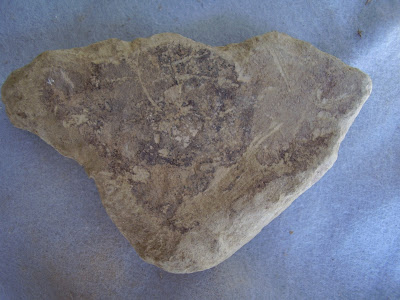 In this photo, the "beak" of the bird is at far right and the tail is far left.  A faint image of the head of a zoomorphic figure with eye, nose and mouth is emerging from the posterior (far left) of the bird.  See the Day's Knob web site for more information on this recurrent theme in pierres-figures identified there.  The Day's Knob archaeological site, also in Ohio, is about 120km from the find site of the bird here.
-kbj
Posted by Ken Johnston at 2:53 PM