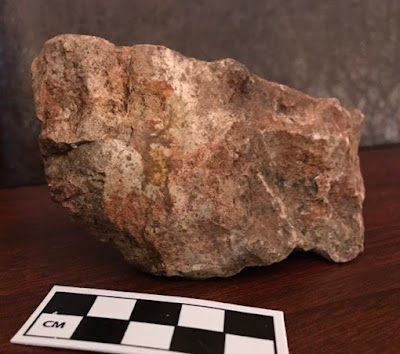 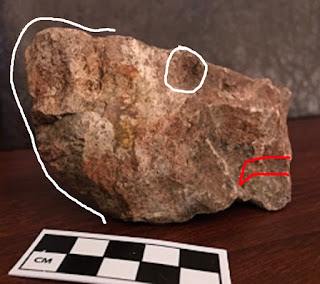 Illustration of the mammoth head and trunk curvature and the locations of the lion's 'eye' and 'mouth.' Please note there is likely some remaining dark pigment at the circled eye location.

This lion head is created in line with a scheme, or template, which has been identified for a number of suspected lion head sculptures on this blog. This, along with the mammoth-like form opposing it leads me to conclude this is an intended sculpture which was manufactured to stand upright in correct orientation. Note the attention given to shaping the lion's distinctive 'chin,' which also serves as the mammoth's 'rear leg.' 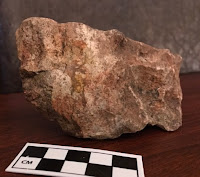 I propose sculptures like this combining mammoth and lion forms suggest a North American Pleistocene "belief world" somewhat analogous to one in the Aurignacian period (ca. 34,000 to 29,000 years ago) in central and southern Germany as described in a paper by Hussain and Floss (2015).


Sharing the world with mammoths, cave lions and other beings: linking animal-human interactions and the Aurignacian “belief world”
ABSTRACT
This paper outlines a “symbolic ecology” for the Aurignacian of Central and Southwestern Germany. Drawing upon data derived from cultural anthropology, psychology and zoobiology, we compare the sociocultural modalities of “managing” the recurrent theme of the mammoth and the cave lion with the encounter and interaction conditions underlying these two specific animal-human relations in the glacial landscapes of the European Early Upper Palaeolithic. We propose that being-in-the-world as highly mobile hunter-gatherers living in open and densely populated “animal-landscapes” strongly promotes non-Cartesian understandings of the animal-human interface, ultimately favouring notions of co-habitation, proximity and social intimacy. By reviewing key aspects of mammoth and cave lion ethology and socioecology, we point out the natural significance and relevance of these animals for human forager groups operating in the same environments. Moreover, we argue that this “natural significance” is directly reflected in the archaeological signature of the Central and Southwestern German Aurignacian that assigns these creatures a pre-eminent place in its material culture repertoire – for instance in craftsmanship, subsistence and settlement organisation and thus in areas deeply anchored in every-day practice. Although there is a clear convergence between the natural prominence of these animals and their sociocultural salience, different eco-behavioural profiles of mammoth and cave lion seem to have motivated varying modalities to engage with them materially. This, in turn, suggests different trajectories of constructing the animal-human interface and therefore a different “status” of both animals in the wider “Glaubenswelt” (belief world) of Aurignacian regional communities. The deep entrenchment of both animals in the sociocultural world as well as the rather unique interaction conditions they offer to human co-dwellers point to the social importance of mammoths and cave lions and thus to animistic and essentially relational ontologies. This, finally, demonstrates the blurring of the Cartesian boundary between animal and human domains and intro-duces the possibility of pondering aspects of “animal-personhood” in this part of the Aurignacian world. We conclude our survey by discussing some critical implications that arise when reading the Middle to Upper Palaeolithic transition from the perspective of animal-human interactions and the entanglement of ontologies and material signatures.