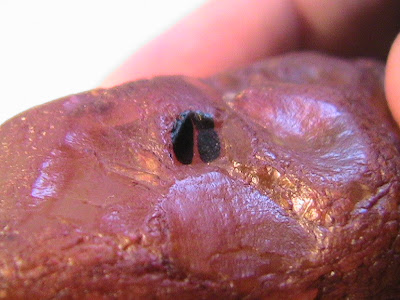 Fossil-featuring by artist at center of pressure-flaked “flower” on a finger held abrading tool.  From Irrigon, Oregon, U.S.A.
The chert here is a beautiful orange and rose color with little black fossil or mineral inclusions.  Information from readers on the inclusions would be appreciated.  When the flint is held to light, the inclusions (hereinafter “fossils”) become visible inside the stone.  This translucence and suspension of visible material in stone may have been fascinating or meaningful to the maker of this tool-with-art (or art-with-tool) object.
This fossil, resembling “Gumby’s legs” in shape, is featured inside three to four pressure flaked “petals” which seem to feature the fossil at center like an open flower.  The stone was removed incredibly precisely at two angles to reveal the two fossil surfaces, each precisely flat and exposed.  When you look at the surface it looks like you are seeing the surface of the fossil itself with all other stone removed and no damage done to the hair-thin fossil whatsoever. 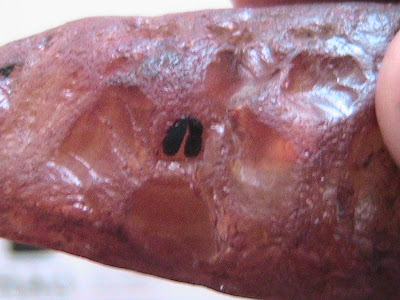 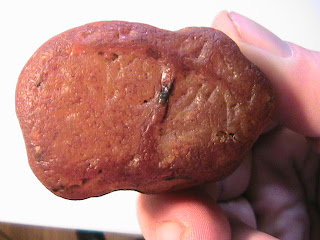 Possible micro-drilled fossil access bore holes on this artifact, and others of the same material to be more closely examined, seem to be disproportionately directed at the fossils from the closest surface plane or from one surface plane.  One would expect a more random showing of hole directions if they were of natural formation.  Maybe they were made to “free the fossils” or “access the impossible” or simply as beautiful curiosities to look at while performing abrading work, likely in personal food processing based on tool size, form and wear surface.  Wear surface in photo above right. 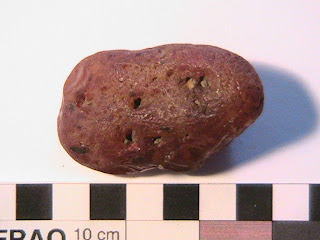 There is a divot hole made on the leading end tip of this tool for placement of the tip of the index finger during optimal grip of use.  Photo right is looking down on the tool, divot for index finger toward top right of tool.  The "flower" is hiden from view on the backside of the tool as seen at right. 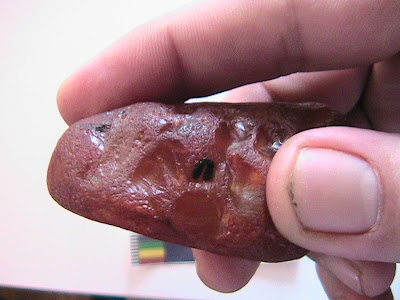 Tool seen at left as held while in use, flower icon and fossil visible to the tool user. 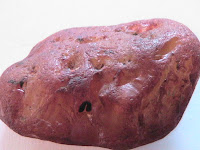 For related information on this topic, please see a work of John Feliks, Ph.D., a founder of the Pleistocene Coalition, titled “The Impact of Fossils on Visual Representation:”
http://www-personal.umich.edu/~feliks/impact-of-fossils/index.html
The oldest and most famous example is the “West Tofts handaxe” which features a scallop shell fossil at its precise visual center (please see another John Feliks article below).  The Irrigon, Oregon, USA, artifact from the Dennis Boggs collection displayed here seems to likewise feature a “frame,” but in the form of pressure-flaked “flower petals” around the accessed fossil.  Flaking away the worn surface of the flint nodule, which has a "frosted" surface due to environmental contact, enhances its translucence in that area, giving the petals of the flower a somewhat "brighter" appearance than the surrounding stone.  The petals are like glass windows into the flint material.
http://www-personal.umich.edu/~feliks/impact-of-fossils/west-tofts-handaxe-geometrics.feliks1995-98/index.html
http://pleistocenecoalition.com 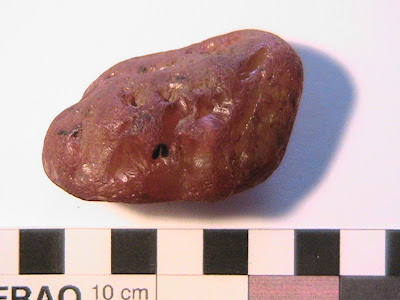 Email ThisBlogThis!Share to TwitterShare to FacebookShare to Pinterest
Labels: Boggs, fossil, OR