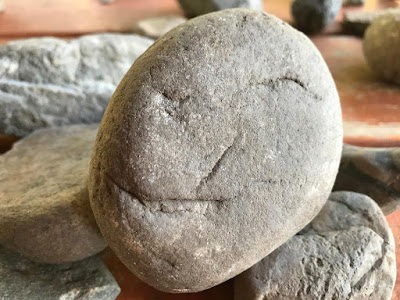 As I mentioned before, I have found many 100's of stones that are peculiar, and look like they represent many different animals. I was not aware of this sort of rock art until I began searching for stones similar to what I have found on the internet. The first style I recognized was the sleeping bird stones, then the non-sleeping birds.

After that I began noticing that many of the stones seemed to represent elephants.

After viewing all of the stones you have on your site I am fairly certain that I have found a large cache of these stones. Many stones are naturally shaped, but they are found with many other stones that show signs of being worked by someone, so I believe they still represent something.


Having seen good photographs of Wade's finds, I agree that he has found a concentration of 'portable rock art' similar to that described by many other careful observers. His description of the 'sleeping bird' motif is an indicator he has detected a Paleolithic rock art site. I will be featuring some of Wade's artifacts in the coming weeks.

Based on its find context and other examples for reference it is my contention that most if not all of the facial elements (eyes, nose, mouth, teeth) on the pebble featured here are the result of human marking rock art behaviors which have not been described by North American archaeologists.

A competent and thorough petrological examination of examples like this can confirm human workmanship and so easily establish what must become a major new line of rock art inquiry for archaeological science.
Posted by Ken Johnston at 9:36 PM