Acoustic resonance stone horn from the Arkfeld site provides an extraordinary opportunity to hear the music of the distant past (30cm). It may be the oldest known stone musical wind instrument in the world.

In this video Adam Arkfeld demonstrates the acoustic resonance stone horn musical wind instrument he identified and has experimented with at Clear Brook, Virginia. Arkfeld's discovery of the instrument and replication of its use provides an extraordinary opportunity for us to hear the musical sounds of the distant past.

Arkfeld thinks the dark and shiny patina of the horn is evidence of heavy handling by human hands over a long period of time in prehistory. It appears to have "lip wear" around the mouth piece.

The art and tools at the Arkfeld archaeology site suggest a Pleistocene age for the site and this may be the oldest known stone wind instrument in the world. Some dated examples of wind instruments made in bone exceed 30,000 years BP, but portable stone acoustics seems much less common. I have not been able to locate record of another example of a naturally advantageous portable stone which has been humanly modified to create an acoustic wind instrument.

The people at Arkfeld Site were masters of limestone lithic technology and were able to exploit it to make the entire range of stone tools they needed, along with many art objects and now we know: musical instruments. This artifact speaks to the durability of the ancient peoples at the site and their profound intimacy with the natural materials available to them. 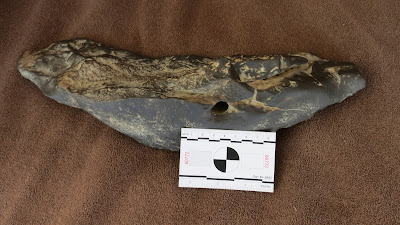 Side 1 with mouth piece 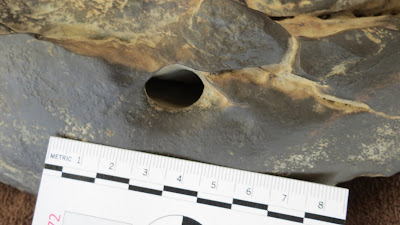 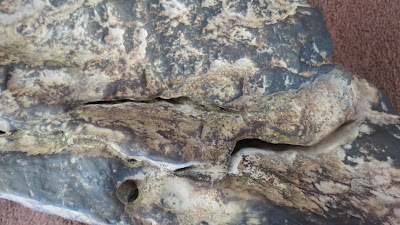 Side 2. A cupped or flat hand on the side opposite the mouthpiece allows one to manipulate the sound vibrations from the horn. The stone appears to have been modified to optimize air flow and vibration qualities. 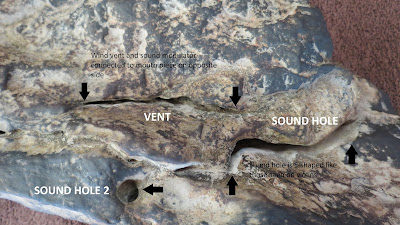 "Though the purpose of sound holes is to help acoustic instruments project their sound more efficiently, the sound does not emanate solely (nor even mostly) from the location of the sound hole. The majority of sound emanates from the surface area of both sounding boards, with sound holes playing a part by allowing the sounding boards to vibrate more freely, and by allowing some of the vibrations which have been set in motion inside the instrument to travel outside the instrument."

Side 2. The stone has a look of two animal heads at the opposite ends looking away from each other. Adam Arkfeld says they somewhat resemble seals. Could it be a seal-horn?
Posted by Ken Johnston at 10:17 AM