Anthropomorphic head pebble from Westlake, Texas, most likely more than a natural coincidence 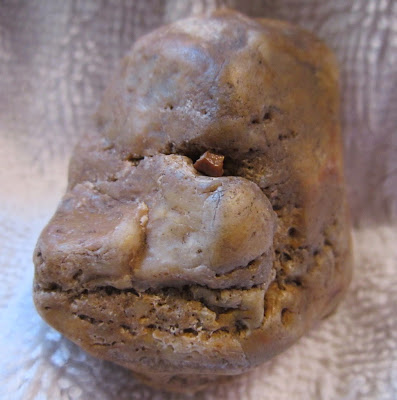 As I have speculated in the past, this may depict a lion's bite to the human head as an element of an ancient folktale or the like. This combines two of the earliest memes in Palaeoart, "predator bite to the head" and "one eye open, one eye closed." (James Harrod, originsnet.org) I think the art suggests these two memes may be somehow related for some ancient peoples.

The geologically fresh nature of the stuck pebble in the eye position with its squared edges supports human work rather than natural coincidence for the origin of this feature. The eye socket has also been expanded to accommodate this eye insert. This is seen in other examples from the Boies collection and from North America and Netherlands sites worked by Jan van Es for both eye and tooth features in the art. 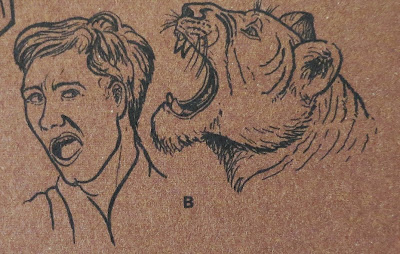 In  his book The Nature of Paleolithic Art, R. Dale Guthrie illustrates his interpretation of an engraving found on a portable stone in a French cave which depicts a lion bite to the head. This art motif may describe the source-event for the left eye missing face mask motif.
Posted by Ken Johnston at 12:00 AM