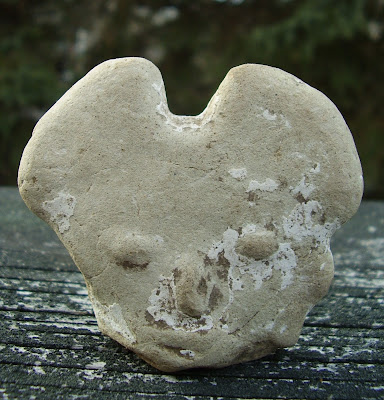 This is the first of the art objects I discovered in my agriculture field hunting in Licking County, Ohio, about 15 years ago. At first glance I thought it was a notched pebble or possibly a net sinker but then I noticed the eyes, nose and mouth of the facial features. I have not seen anything looking like it or using the same manufacture techniques in the intervening years, attesting to the anomalous nature of this object to my central Ohio locale.

15 years ago, I dismissed this piece as likely insignificant because I perceived it as "crude and unsophisticated" thanks to the indoctrination I was receiving from the archaeology mainstream about the "high art nature of good and worthy" Native American art. Nowadays, I keep returning to the same area to look for more but no-till farming is not providing the soil access I had 15 years ago. Other suspected tools and art objects in area are thought to be Paleolithic (9000+ years old). 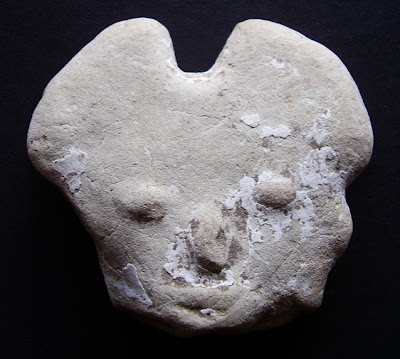 There are traces of white paint on the artifact. This substance would be ideal for scientific archaeological analysis and could provide insight into the material culture of the person who produced this stone head. 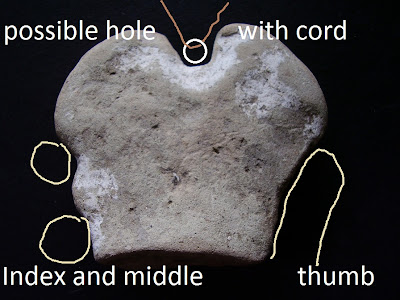 My inerpretation of the piece speculated it was used as a pendant hanging around ones neck where the hole wore through in use and the piece was then used as an idol standing on its neck base. The illustration above shows the back side the pendant as it would face ones chest. Areas of stone wear on the artifact suggest the pendant could have been handled significantly while being worn by someone. If the person were right handed, there is a nice thumb pad on one side and two notches which perfectly accomodate the index and middle fingers on the other side.

Heavy handling evidenced by this wear may have been responsible for the original hole wearing through and leaving the current gap in the center of the top of the head. 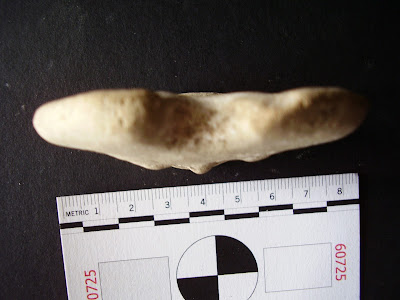 Seen from above with scale 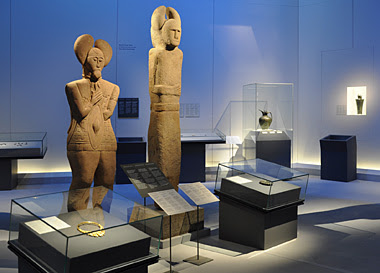 As an alternate explanation for the "horned aspect" of the Ohio figure's head, German rock art archaeologist Ursel Benekendorff noted the Ohio artifact's resemblance to known depictions of Celtic warriors from Germany. Maybe it was not a corded pendant but was designed to have a split head from the start in accordance with some cultural tradition, Celtic or other. Interestingly, the Ohio Licking River valley is home to burial mounds, the largest geometric earthwork in the world, and a possible sacra via, similar to descriptions of the German Celtic site at Glauberg. 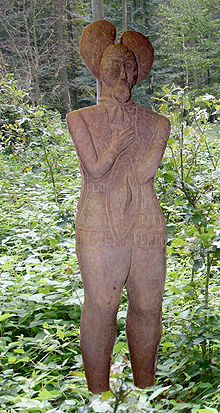 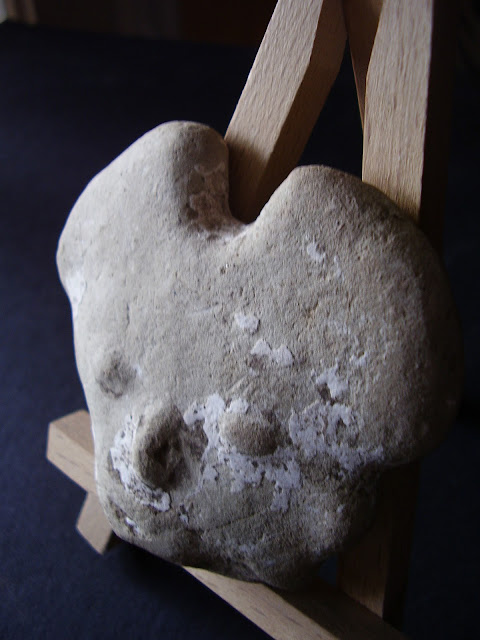 The Ohio figure on a small easel 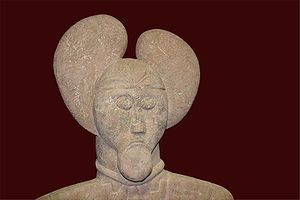 "Warrier of Glauberg" 2500 years before present