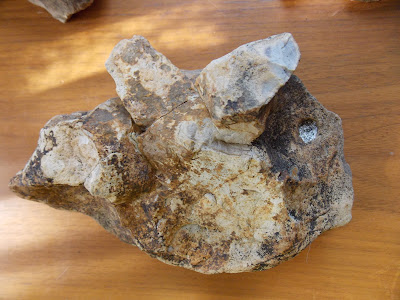 Ronda Eldridge find, Bee House, Texas
From a context of other figurative portable rock art sculptures. It measures 5" by 8"

The bird's head may be seen at left, in the middle the bird's wings serve as the ears of a rabbit with a smiling face (Ohio motif analog in flint) and at right is the profile of a human face with a ground and then pigmented (white) eye.

Ronda writes about her interpretation of the sculpture: "The 'bee' is a whopper with regard to size measuring out at five inches by almost eight inches across. I would say it easily weighs over a pound. What I see as an "eye" has a white substance inside of it. There are no other white areas on the entire piece. Bees have a significant history associated with the area and there is still a significant amount of vegetation along the creek here pollinated by bees. Of course, I am assuming it is a bee when I realize it may have represented some other winged creature.

The "duck" heads are almost as common as the ones that look like cardinals. I have seen wild ducks fly through here but in our recent drought years, they never stay long. It would have been exciting to see what differences in the terrain existed at the time these artifacts were created." 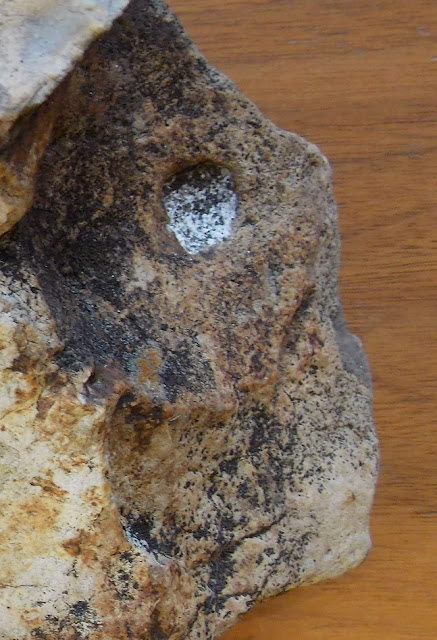 The only white part of the sculpture is the eye of the human. A human facial profile opposite the animal or bird figure is seen repeated again in this remarkable piece. Native American art scholars and archaeologists should be studying a piece like this, with black and white pigment residues available for scientific composition analysis. 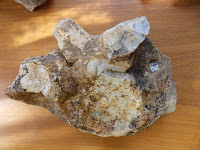 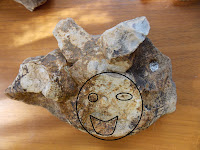 (click photos to expand and compare)
Ken Johnston detected a smiling face image in pigment below the bird/bee wings/rabbit ears. 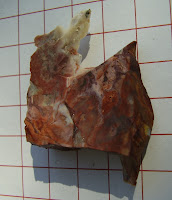 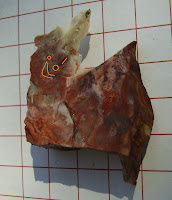 A broadly smiling, winking rabbit figure has been described from Ohio previously on this blog which lends support to this interpretation of "intentional pigmentation" of the mouth shape on the middle face on the Texas sculpture. Now I can suggest the "Happy rabbit" was an iconic art motif in portable rock art of prehistoric middle North America.