Europa in America: Woman/goddess riding bison and white bison figures found together in an Ohio cornfield 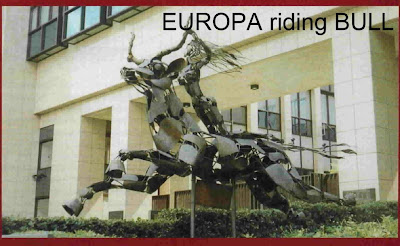 The mythographers tell that Zeus was enamored of Europa and decided to seduce or ravish her, the two being near-equivalent in Greek myth. He transformed himself into a tame white bull and mixed in with her father's herds. While Europa and her female attendants were gathering flowers, she saw the bull, caressed his flanks, and eventually got onto his back. Zeus took that opportunity and ran to the sea and swam, with her on his back, to the island of Crete. He then revealed his true identity, and Europa became the first queen of Crete. Zeus gave her a necklace made by Hephaestus and three additional gifts: Talos, Laelaps and a javelin that never missed. Zeus later re-created the shape of the white bull in the stars, which is now known as the constellation Taurus. Some readers interpret as manifestations of this same bull the Cretan beast that was encountered by Hercules, the Marathonian Bull slain by Theseus (and that fathered the Minotaur). Roman mythology adopted the tale of the Raptus, also known as "The Abduction of Europa" and "The Seduction of Europa", substituting the god Jupiter for Zeus. 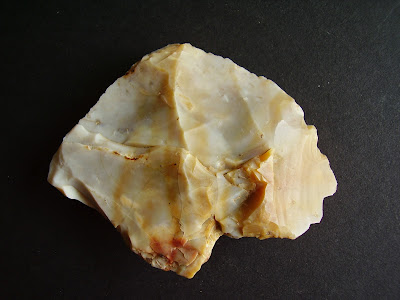 Woman/goddess and bison: Zeus and Europa flint figures found in an Ohio cornfield.

Found by Pam Douglass at Jacksontown, Licking County, Ohio, near Flint Ridge.  Within a few feet of this figure, Pam found a flint she identified as a sculpted white buffalo head which was featured in a prior posting, featuring a crystal-lined "eye" which penetrates the flint.  It is seen in the final artifact photo below.

The bison and female relationship in paleoart dates to Chauvet cave and earlier. It persisted through Greek and Roman mythology.  A question for art scholars based on the two finds featured here is: at what point in time did the bison become white in the art?  That might help date these two exquisite pieces of flint work.  This Licking County, Ohio, Flint Ridge artistic flint work is documented for greater archaeology for the first time here on portablerockart.com 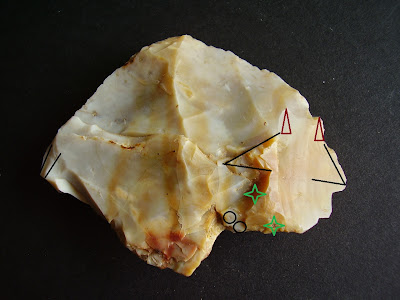 In a prior posting, Ken Johnston interpreted a bison in this perspective. The "eyes" are highlighted as green stars.  A small tail stub is highlighted at far left. (click photos to expand) 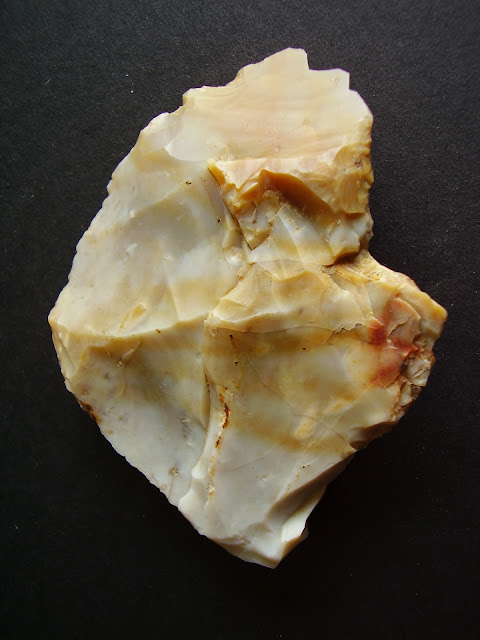 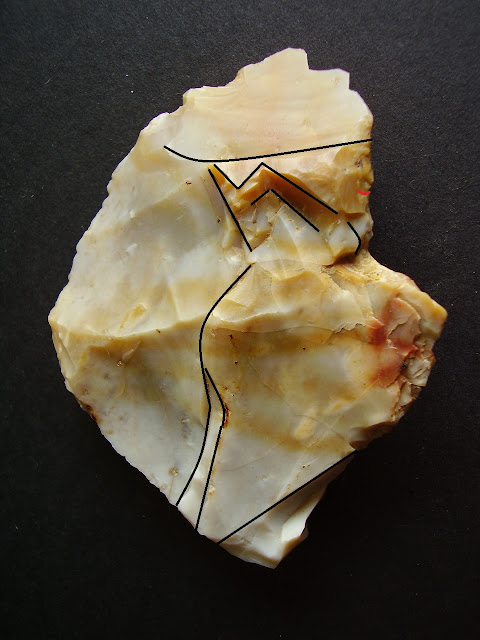 A pregnant woman may be seen where her breasts are also the shared nostrils of the bison from the other view.  Her protruding belly is the reddish flint at the far right. The woman and bison also share an eye which is a sparkling silver inclusion in the flint. It is revealed here by the black line markings that the woman's arm is depicted as reaching back to hold the horn of the bison.  Even her forearm muscles are shown. The woman's lower body in this view could also be interpreted as a mammoth view head on with the funnel shape of the trunk being depicted.  This would be in line with known paleoart.  Duncan Caldwell has written of the "first optical illusion" which is an artifact which can be interpreted two ways, as a mammoth or a bison, depending on how you view it. 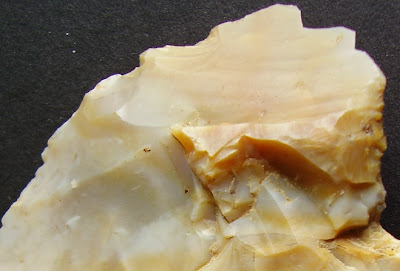 Crystal eyed, breasted woman, hair flowing, with arm reaching back and grasping the horn of the bison 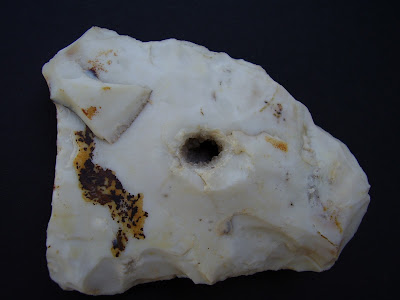 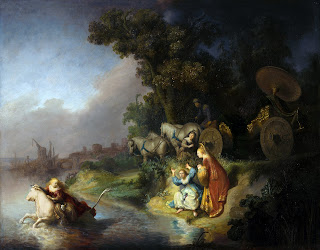 ""The association of woman/Goddess and bison is deep. Again and again they are found, in different forms, together, often both pregnant. If we look at the gestation time of women and bison, we find that they both have a 10 lunar month pregnancy. Like the Horse and Bear, the Bison is an animal with great mythical importance. We tend to think of the bull cults of Minoan Crete or Çatal Höyük, or the horned Goddesses of Egypt, but the bison/bull is of course also one of the most often depicted animals in Palaeolithic art, and so must have held great significance much further back in history as well. In fact, like the clay bear statue described in GA12, there also exists an exquisite clay bison sculpture from the same period. A bull and cow bison about to mate, the cow ready and the bull scenting the air, can still be seen deep in the cave of Tuc D’Audoubert.  The association of Goddess/woman and bison in Palaeolithic art is a particularly strong symbolic image of the shamanistic concept of life and death and suggests lunar mythology of transformation and gestation. [Marija Gimbutas, 1989]. There are many examples of this mythic importance of the bison; Laussel’s goddess being perhaps the most famous, holding her pregnant belly and the 13 lunar month-notched bison horn." (The Abduction of Europa by Rembrant, 1632. Click painting image to expand.)